Many Labs 5: Registered Replication of Vohs and Schooler (2008), Experiment 1 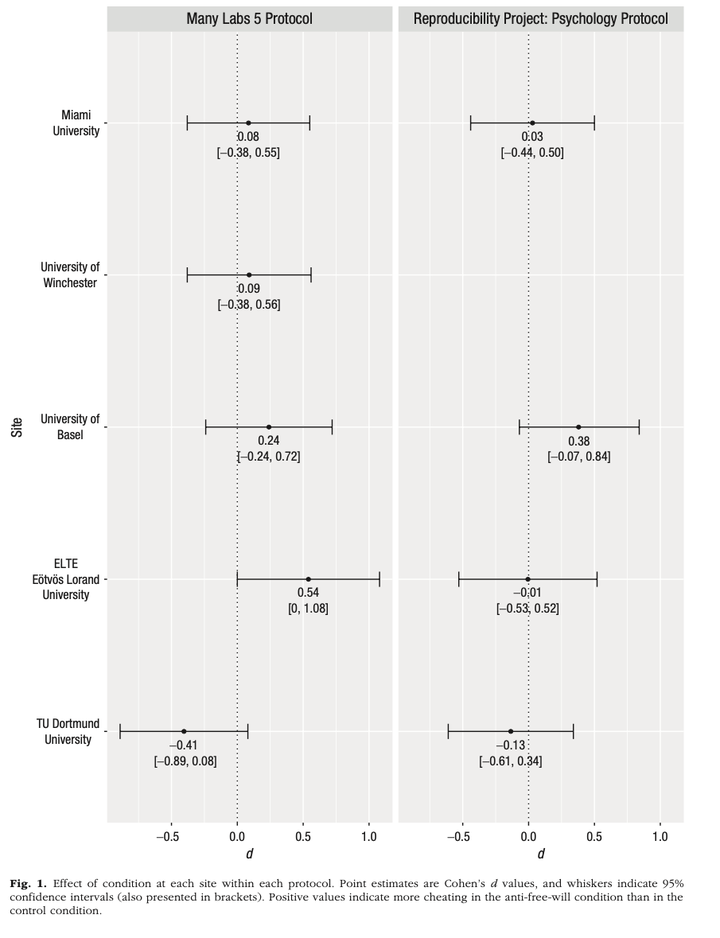 Plot with effect of condition at each site within each protocol.

Does convincing people that free will is an illusion reduce their sense of personal responsibility? Vohs and Schooler (2008) found that participants reading from a passage “debunking” free will cheated more on experimental tasks than did those reading from a control passage, an effect mediated by decreased belief in free will. However, this finding was not replicated by Embley, Johnson, and Giner-Sorolla (2015), who found that reading arguments against free will had no effect on cheating in their sample. The present study investigated whether hard-to-understand arguments against free will and a low-reliability measure of free-will beliefs account for Embley et al.’s failure to replicate Vohs and Schooler’s results. Participants (N = 621) were randomly assigned to participate in either a close replication of Vohs and Schooler’s Experiment 1 based on the materials of Embley et al. or a revised protocol, which used an easier-to-understand free-will-belief manipulation and an improved instrument to measure free will. We found that the revisions did not matter. Although the revised measure of belief in free will had better reliability than the original measure, an analysis of the data from the two protocols combined indicated that free-will beliefs were unchanged by the manipulations, d = 0.064, 95% confidence interval = [−0.087, 0.22], and in the focal test, there were no differences in cheating behavior between conditions, d = 0.076, 95% CI = [−0.082, 0.22]. We found that expressed free-will beliefs did not mediate the link between the free-will-belief manipulation and cheating, and in exploratory follow-up analyses, we found that participants expressing lower beliefs in free will were not more likely to cheat in our task.